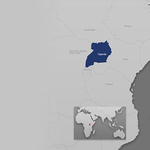 The divides and challenges from past trauma facing the youth of Kiryandongo Refugee Settlement are stark. With few structured activities for youth from both sides of the conflict in South Sudan to interact and a lack of exposure to activities and experiences outside of the camp, conflict between tribal groups within Kiryandongo Refugee Settlement is not uncommon. Bringing children and youth across tribes together to play sports with each other, as opposed to against each other, is an informal entry point that can be an initial bridge to larger societal change.

However, any program design can’t stop by simply addressing the current conflict, but also must speak to the trauma faced by youth before and since arriving in Kiryandongo Refugee Settlement. In 60% of the interviews conducted by RMF/PPI, “trauma from past experiences” was mentioned as a major issue facing children and youth today.

In the two primary schools PeacePlayers International (PPI) visited on their trip to Kiryandongo Refugee Settlement, there is an average of 1 teacher for every 93 students. In this environment, the Kiryandongo Sports Program has great potential to help its target beneficiaries develop the full range of life skills necessary for successful integration.